To say that I am feeling SOOOO much better since I amused Myself on Friday is an understatement. Of course I also amused Myself with sissy michelle and sub c this past week to name a couple. I'm sure sissy michelle is as calm and docile as ever since even at a distance, I banded those bits between her thighs for almost an hour as well as banded her sissy clit at the same time. No erections for awhile plus those silky panties are going to look fabulous. <wicked grin>

As for sub c, he proved how big of a slut he could be by sharing video proof of him fucking himself while wearing his wife's pink panties. LOL Certainly gave Me a giggle.

Finally after weeks of dealing with the Ohio stay order which has been somewhat lifted, I was able to amuse Myself with sub drippy in person. After a couple of cleansing enemas, I restrained him down with his arms/legs to each corner of the bed then tied his balls to the end of the bed but tied his cock to the winch above the bed. Helpless, I began to get all My frustration out while he attempted not to move. If he moved his body towards the end of the bed, his cock was pulled painfully by the winch above. If he moved up towards the head of the bed, his balls was stretched. LOL Oh yes, I enjoyed testing which body part he would sacrifice to avoid the pain and discomfort. As you can see below within My eye candy, I ended our time together by suspending him upside down with the new suspension boot restraints, restraining his arms behind his back and tying his cock/balls to point directly down towards his face. Can you say forced facial? LOL Of course right after I snapped My picture, I removed the hood. And yes, his wide open mouth was a great target. <wicked giggles> 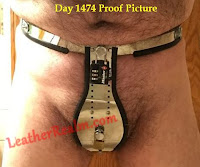